In a recent TED Talk, Steven Johnson, the best-selling author of six books on the intersection of science, technology and personal experience, gives a presentation titled, Where good ideas come from. 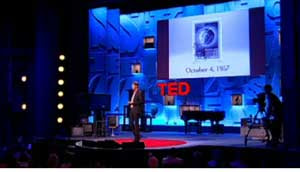 He notes how England's coffee houses became a social meeting place for people that began one of the great intellectual periods in the last 500 years — “The Enlightenment” — in that it allowed different people with different backgrounds and different fields of expertise a place to meet and exchange ideas.

An idea is a network (a new configuration); however, that idea is normally cobbled together from whatever parts happen to be nearby — we take ideas from other people, people we learn from, people we meet in the coffee shop, and then stitch them together into new forms. Fred Stratton (CEO of Briggs & Stratton) once said that genius lay in the ability to see how two or more ideas that nobody else sees as related are indeed related. This ability to make an analogy between different ideas unlocks a world of potential. And the means that we get to see various ideas is often accomplished by connecting with others. 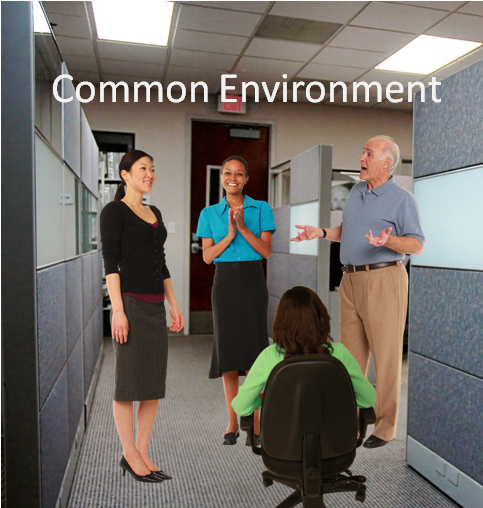 These meeting places where we connect are often called “common environments.” However, social media tools, such as blogs, micro blogs (e.g., Twitter & Yammer), file sharing (e.g., Flickr & SlideShare), virtual meeting places, (e.g., Adobe Connect & Elluminate), social sites (e.g. Facebook & MySpace), and wikis now provide a virtual bridge by acting as the common environment in many instances. This virtual bridge allows people to interact with each other in much the same manner as they would in a common environment, thus they are virtually able to observe, gather new ideas, and learn from others. 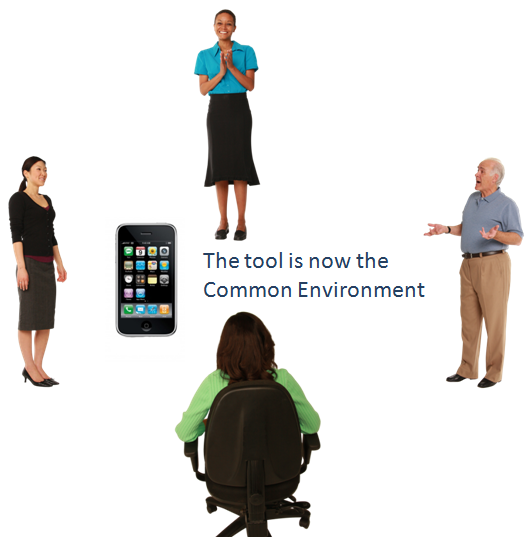 Space has shifted as people do not have to be in the same physical location. The availability of the common environment has been greatly extended.

The Formation of New Ideas

While people often say they get their ideas in sort of an eureka minute, they are for the most part unreliable when performing this self-reporting on where they get their new ideas. Rather than being an eureka minute, ideals normally happen when people get together so that they can bounce ideas off other people, absorb the thoughts of others, and then build relationships between the various ideas..

While we might think that our ideas come in one spark, they normally are created in an incubation period consisting of 1) connecting with others 2), seeing a relationship between different ideas, 3) developing each part of the new idea, and 4) the joining of the parts in order to create the finalized idea (it is this last step that gives the illusion that the idea is an eureka moment).

Asking if Something Can be Done

In his talk, Steven Johnson tells the story of when Sputnik was launched, two guys named Guier and Weiffenbach started listening to the pings coming from its signal. After a while they noticed small frequency variations that allowed them to calculate the speed of the satellite. They began talking to their colleagues who had other kind of specialties and about three or four weeks later they mapped the exact trajectory of this satellite orbiting earth.

A couple weeks later their boss, Frank McClure asked them, “You've figured out an unknown location of a satellite orbiting the planet from a known location on the ground. Could you go the other way? Could you figure out an unknown location on the ground, if you knew the location of the satellite?” After thinking about it they discovered it would actually be easier. Guier and Weiffenbach's boss needed to be able to do this as he was working on new nuclear submarines in which it was extremely difficult to calculate the aim of a missile so that it lands on top of Moscow, if you don't know the exact location of a submarine located in the middle of the ocean.

Guier, Weiffenbach, and McClure opened the avenue of GPS. Thirty years later, Ronald Reagan opened it up and made it an open platform that anybody could build upon and anybody could build new technology that would create and innovate on top of this open platform. A closed system connects with a small number of minds, while an open system has an opportunity to connect with a large number of minds that in turn, greatly increases its chance of becoming a new idea, which in turn can become a new innovation.

The Process of Creating Ideas

Thus, connecting people allows the exchange of ideas that form new ideas, which in turn can create another idea that works best when it is opened up to innovation: 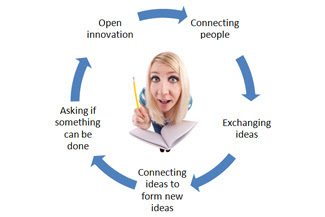 This process of creating ideas is important when designing learning environments. 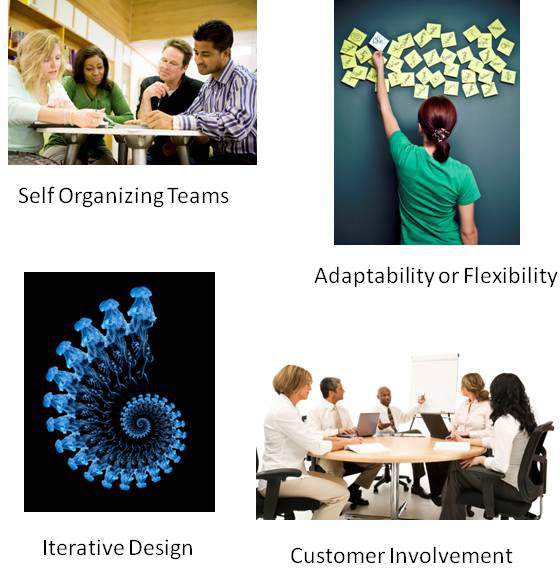 For example, one of the concepts of Agile Design is bringing the designers, managers, learners, and subject matter experts and/or exemplary performers in on the planning stage as a high degree of collaboration needs to take place to accurately identify the problem and solution. When extending instructional system design to solve complex problems, you need to fully immerse yourself in the problem to fully understand it. 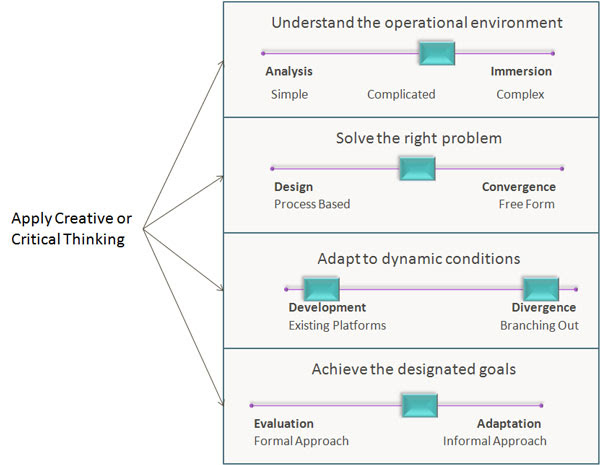 To accomplish either of these requires connections so that the idea creation process can begin.

And we need to not only include the process of creating ideas in our building of learning platforms, but also extending them to the learners so that they can create ideals that will help lead to innovation. Rather than build walls, have no walls. The physicist Freeman Dyson once wrote:

When writing, I close the door, but when doing science, I leave it open. Up to a point you welcome being interrupted because it is only by interacting with other people that you get anything interesting done.

What have you done lately to help increase the creation of ideas within your organization — have you helped to tear down the walls rather than build walls?