The Growth of eLearning

In a recent blog, I wrote how elearning has the two aspects of means & consequence that uses innovative technologies and learning models (the means) to transform the way individuals and organizations acquire new skills and knowledge and access information (the consequence). Note that I slightly change the last part of this definition from the original post. It is important to understand this concept if you want to play a part, or at least a meaningful part in elearning's growth, which according to IDC, should look similar to this:

When elearning first arrived on the scene, it was hyped to grow at a phenomenal rate: The next big killer application for the Internet is going to be education. Education over the Internet is going to be so big it is going to make email usage look like a rounding error. - John Chambers , president and CEO of Cisco Systems (2000). Now it has enjoyed a modest growth rate so far, but nowhere near the growth that was first hyped. Thus, it is kind of refreshing to see IDC's modest growth prediction, although it still might be slightly on the high side. And this growth rate is going to be fueled by four things:

Until recently, most of the discussions on elearning were about the technology aspects. For example, elearning is about learning anything, anyplace, at anytime. Yet it is just about impossible to get very deep into a topic when you are consistently interrupted by phones and co-workers. In addition, elearning is normally done at a computer, which of course does not go everywhere. However, with wireless (m-learning) and iPods, this is starting to change. Thus, there are basically three technologies at the moment that will help with elearning's growth:

The Gilder Paradigm (Wired, 4.12 - Dec 1996) reports that in the future, if the law of thrift in the current paradigm is waste watts and transistors, the law of thrift in the new paradigm will be waste bandwidth and save watts. That is, if bandwidth is free, you get a completely different computer architecture and information economy. While other futurist simply tell about the future, George Gilder (Wired 4.03 - Mar 1996) gives us the nuts and bolts about the future. Cheap, unlimited bandwidth is not yet reality, however, when it does arrive, it will give an extremely big boost to elearning. Much of the elearning programs developed today are text-based adaptations due to the extra bandwidth required to carry multimedia programs. Learners do not enjoy looking at an hourglass while waiting for downloads of huge video and audio clips. Thus, faster connections will mean that we will be able to add the correct instructional methods to support the learning

As wirless and WiFi networking is becoming more popular, mlearning will boost the feasibility of learning anyplace and anytime (as long as you can get away from those pesky interruptions).

Right now, most people vision elearning as sitting in front of a computer, yet if we change that scenario slightly to listening to a ipod, that is, rather than downloading music, you download some verbal information and perhaps some pictures, then e-learning starts to expand... Podcasting works similar to a desktop aggregator, in that you subscribe to a set of feeds, and then view the new stuff from all of the feeds together, or each feed separately. Podcasting has one major difference -- instead of reading the new content on a computer screen, you listen to the new content on an iPod or iPod-like device. Think of your iPod as having a set of subscriptions that are checked regularly for updates. For a list of some of the podcasts now available, see podcasts.

The technology aspect of the internet provided the first means for the beginning of elearning. And by growing it through cheap broadband, mlearning, and podcasting, we further fuel its growth. This is the first of a four-part series on the growth of elearning. The second means of fueling the growth of elearning via "learning methods" will be discussed in the next blog. Skills & knowledge and accessing information will then follow.
Posted by Donald Clark at 8:57 PM 3 comments:

e-Learning: In Search of a Better Definition

One of the first definitions for e-learning is ASTD's, who define it as covering a wide set of applications and processes, such as Web-based learning, computer-based learning, virtual classrooms, and digital collaboration. It includes the delivery of content via Internet, intranet/extranet (LAN/WAN), audio- and videotape, satellite broadcast, interactive TV, and CD-ROM. ASTD's definition is somewhat different in that it basically defines anything that is electronic (electronic learning) as e-learning. On the other hand, Marc Rosenberg confines it to the internet in his book, e-Learning: Strategies for Delivering Knowledge in the Digital Age (2001): e-Learning refers to the use of internet technologies to deliver a broad array of solutions that enhance knowledge and performance. It is based upon three fundamental criteria: In a May 2003 article on CLO, Organizing Enterprise-Wide E-Learning and Human Capital Management, e-learning is defined as including not only Internet-published courseware, but also the tools for managing, modularizing and handling the following: In other words, e-learning does everything in the corporate world but training! The author misses the mark on this one as a major part of "e-learning" is of course "learning." However, there are two parts to learning, just as there are in performance. Gilbert said that performance has two aspects: behavior being the means and its consequence being the end (1998). Learning is similar in that it also has two aspects: training or teaching being the means and its consequence being the end. Now the training or teaching may be self-taught, accidental, informal, or purposeful, however, there is a means and the consequence is learning. In a recent new article, IBM tackles learning in the workplace (Nov 8, 2004), Victor Jeurissen, global practice leader for IBM Management Development Solutions, defines e-learning as, "the use of innovative technologies and learning models to transform the way individuals and organisations acquire new skills and access knowledge." He further defines learning as �a collaboration of information, interaction, collaboration and in-person." IBM's definition is the most interesting and promising in that it also refers to the two aspects of learning -- "innovative technologies and learning models" to provide the means, with the consequence being "acquiring new skills and access knowledge." The "means" provide the learner experience of absorbing (reading, seeing, etc.) doing (activity), interacting (with people), and reflecting (connecting the new learnings with previous learnings). And so that the right skills and knowledge are learned (consequence of training/teaching), rather it be face-to-face or over the internet, requires design and development: 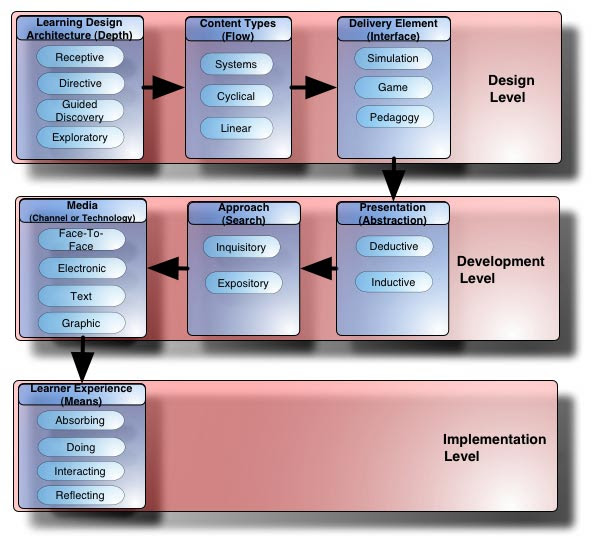 Further information on the above chart may be found at: Learning Framework. The reason that we have to design and develop for the "right skills and knowledge" is that we are accountable to the organization for spending resources wisely. In the IBM article, Victor Jeurissen further remarks that, "75% of CEOs think employee education is the most critical success factor relative to other people issues. Learning directly supports the top agenda of CEOs, business groups and customer responsiveness." This of course takes us to the analysis of learning: the study we do in order to figure out what to do. Analysis allows us to directly make a positive impact upon the business or organization so that we do indeed support the CEO, various business groups, and customer responsiveness. For more information on analysis, see Needs Analysis. By viewing e-learning and learning as having two aspects, we can better define learning's role in the organization. Comments welcomed.

Developing high-value content that advances your business strategy and tactics presents two key challenges. The first challenge is to determine what existing content provides the greatest value and, just as important, what does not provide value. The second challenge is to determine what content doesn’t exist, but should. To identify and better manage content, use a methodology that shows a “system” view of a process. This provides you with a structure to track the assignment and refinement of content requirements throughout the process model. You need at least three views of a process: an outline view, an activity detail view and a sub-activity/sibling view. View 1: Modeling the Process Modeling, or outlining a process is straightforward. You break down or decompose activities into greater and greater detail (“process” is merely a label for the highest level of collected activities). Think of it as a table of contents that becomes increasingly detailed. This can be captured as a flow chart (as in Figure 1), as an indented hierarchy like a Windows file structure or in a spreadsheet or in Microsoft Project, which allows you collapse sub-activities (tasks) so they are easier to manage visually.

Posted by Donald Clark at 10:04 PM No comments: