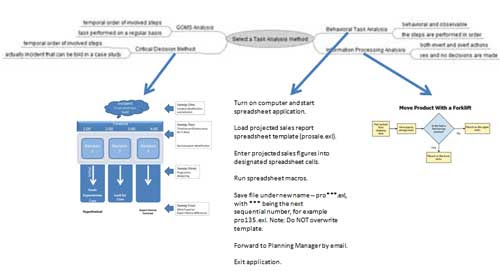 Part of the analysis phase is capturing the skills required for performance. While there are several methods for capturing these performance, ISD normally only lists Behavioral Task Analysis. However, many task are largely overt and nonprocedural in nature, thus they require a Cognitive Task Analysis. The solution of course is to simply plug the desired method or tool into the ISD or ADDIE model as it is quite dynamic rather than the stale linear model that some believe.

Four analysis tools will be discussed in this post that may be plugged into ISD:

Selecting the correct analysis tool is dependent on the type of actions the worker must perform. This performance is normally composed of two types of actions:

While some some tasks are only composed of one or the other, more complex tasks may be composed of both actions.

In addition, the selection of the analysis tool is also dependent upon the task steps:

These methods are used when there is a temporal order of involved steps, thus there is a set procedure for performing the task. Two analysis tools that fall under Procedural Analysis are Behavioral Task Analysis and Information Processing Analysis.

Behavioral Task Analysis is used to capture overt actions by observing and recording an Exemplary Practitioner perform the task. Questions may also asked to ensure the analyst has fully captured the performance. This is perhaps the easiest method. The output is a list of steps that may also have diagrams or pictures of the desired performance or behavior. A short example is:

Depending upon the learners' prior knowledge and the complexity of the task, the list might also contain substeps as shown in this example:

This tool is used when there are both overt steps that require a set order and covert steps that require decision making of a yes or no nature. The overt actions are captured by observing and recording an expert performer, while the covert actions are captured by having the expert performer talk about their actions (thinking aloud). Capturing the decision making process makes it more difficult than the Behavioral Task Analysis, but it is perhaps the most common method as the majority of tasks require decisions. The output is commonly a flow chart composed of three elements that outline the task steps:

A short example of a flowchart showing a decision a forklift operator must make when moving goods from the receiving dock to a storage area may look like this: 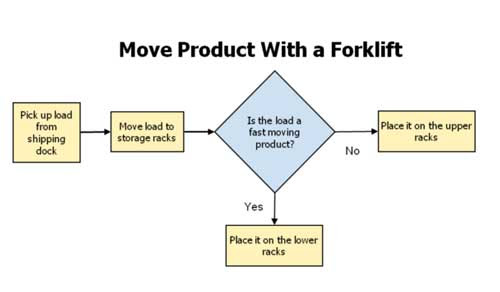 These methods are used when there is NO temporal order of involved steps, thus there is not a set procedure for performing the task. In addition, most of the task steps are normally of a overt nature. Two tools that fall under Rule Based Analysis are GOMS Analysis and the Critical Decision Method.

The GOMS tool analyzes a task by examining four elements of it:

Capturing the performance of a covert task can be done in many ways and normally several are used to capture the task. Some of the more common ones are interviews, job shadowing, having an expert performer think-aloud, and storytelling.

The GOMS analysis can normally best be represented by a concept or mind map. The Goals will normally be placed on the map first, which is then followed by placing the Methods and their Selection Rules on the map. The details (Operations) are then listed. Shown below is a partial mind map of selecting an analysis tool:

Depending upon the size and the scope of the task, you might have to link or reference other documents that go into more specifics about the Operations, Methods, and Selections rules. However, be careful as one of the common mistakes in GOMS analysis is getting too specific, which results in long and detailed procedural descriptions that are difficult to follow.

This can be thought of as a Case Study, however, it also includes a visual reference or map. Just as a case study uses an actual incident to tell a story, CDM is also performed by having an expert tell a story about a particular task they performed in the past. For example, an Instructional Designer might tell how he developed a Just-in-Time program for training sales persons to sell a new product or a fire fighter might tell about the actions she took in fighting a gas station fire. Note that when the person tells the story, the interviewer might have to probe to gather some details. While the output might include a case study, it should normally include a map similar to this: 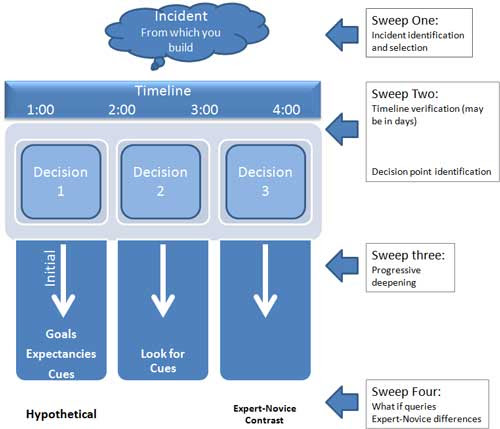 The finale outputs, such as a list of task steps, flowchart, mind map, or CDM chart prove not only invaluable to the the design team, but may also make excellent performance or learning aids. Just as it is as important to use a correct analysis tool, it is also just as import to represent the findings in a manner that others can understand.

The final output might not be just one chart, but rather a combination of them as shown in the picture at the top of this post. Also the chart does not have to be combined into one page if it gets too cluttered, but may rather be composed of a collection of documents that are linked together electronically or referenced if they are printed. In addition, other types of charts and visualizations representations may also be used.

Both Merriënboer and Crandall, Klein, & Hoffman's books are excellent references and provide different information about Cognitive Task Analysis, however, Merriënboer's is now out of print, thus the used books may be a bit on the pricey side.

ADDIE Does More Than Classrooms 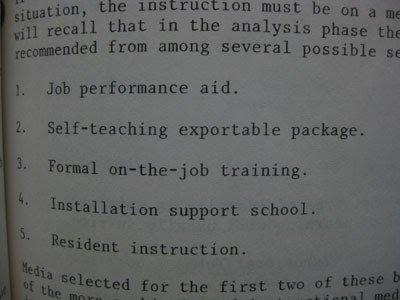 The five options are shown below with a few notes about them:

Just as training designed for the classroom, the other options also need to follow the five phases of ISD to ensure they do what the are supposed to do. For example, even a simple JPA requires:

The manual also gives some guidelines for selecting the correct training setting:

In addition, think blended learning. When I was first trained in ISD we called it BoB (Best of Breed). Blended learning solutions are normally more efficient and effective when designed correctly as they inherit the best of each setting. And do not think of blended as just Brick and Click, but rather any combination of the above, plus more informal options, such as mentoring and social learning media.

ADDIE and the 5 Rules of Zen

Posted by Donald Clark at 7:33 AM No comments:

ID is not ISD

One of the trends in the learning industry is proclaiming that a new Instructional Design (ID) model, such as rapid development prototyping, needs to replace Instructional System Design (ISD) because the new model provides more benefits, such as it's newer, dynamic, and faster. Yet ID models differ from ISD models, thus its sort of like saying that a new boat model is going to replace the automobile—yes they are both transportation devices but they do differ in their uses!

Two popular ISD models are ADDIE and The Dick and Carey Model. ISD can also be extended by using Frog Design's model to solve wicked or complex problems as it aligns with ADDIE:

ISD can be thought more of as a project management tool while ID models are specialized tools used to enhance the learning process.

Omitting ISD and relying strictly on an ID model often omits critical parts of the design process, such as analysis and evaluation. Thus, unless you design for certain groups in an organization or industry in which you know your learners, analysis is important to determine the skill level that the learning program is aimed at. In addition, managers will often identify any performance problem as a training problem, thus the designer needs to ensure it is indeed a training problem rather than a bad process or motivation problem.

Evaluation is not only important to determine if the program is meeting the needs of the organization, but also as a learning tool for the designers themselves.

The best way to use ID models is to plug them into the ISD model as they are needed. For example: 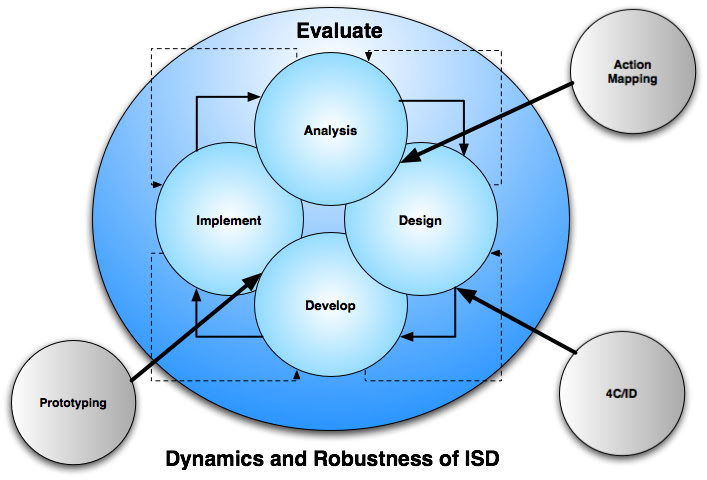