Formalizing the Informal: Been there, done that

@Ecollab asks, “Can we formalize informal learning?” My answer, “We've been there, done that.” Except for perhaps compliance learning programs, formal learning processes are designed to do exactly that. For example:

When we put in place a training platform (learning to do a present job) we are ensuring the workers learn a certain process that should not be left to chance. By chance I mean that the workers MIGHT discover a process that they should be following so that your product and/or service is delivered to the customers correctly, thus they learn it informally. Whenever we initiate a training program we are saying that this process is too important to be left to chance (informal learning).

When we put in place an education program (learning to do a future job) we are ensuring that we have in place a critical position that we cannot do without. Most workers learn to do their coworker's job through informal learning. However, some positions are vital to a critical process, thus we cannot leave it to chance (informal learning).

Whenever we develop workers (helping them to grow so that the organization grows), we are helping them to learn certain skills that would otherwise would have to be left to chance (informal learning). For example, in my last post, Driving the Informal with the Formal, I discussed how to capture lessons learned with an AAR and social media.

Note: If you are lost with the three terms (training, education, and development), see The Three Words Your Customer Must Know.

I think this 80/20 informal/formal thingy is kind of going in the wrong way. We should be spending the majority of our time on 20% of the learning taking place within our organization — remember the Pareto principle? Thus you should be asking:

The 80/20 rule is exactly what we should be doing; however, ensure that the 20% that you are spending most of your time on is the RIGHT 20%.

Driving the Informal with the Formal

There has been some discussion recently that as the world gets more complex, formal learning becomes less relevant. However, complex environments imply an "emerging practice," which in turn implies a customary way of operation or performance. Yes, they may be still emerging, but unless these emerging practices are dealt with in a manner that ensures they do indeed become a customary way of doing things, they will soon turn to chaos if left to chance.

For example, I used to work in a manufacturing environment in which our products had a relative firm foothold in our section of the food industry. Mostly because it was new. Thus with little competition we could take our sweet time in how we dealt with growing and moving forward. However, as we become more successful, other companies, both large and small, soon moved into our niche. Thus in order to stay ahead of them we had to produce faster, cheaper, and with more variety; all while still maintaining the quality that our products were known for. Almost every other month we were moving onto something new, such as Lean and Just-in-Time on the manufacturing side and engagement and communication theories on the OD side in order to ward off the increasing intense competition. Basically we would at first embrace the entire concept for a short while and then examine what worked best for us and what had little or negative impacts, and then shed the unworthy ones. 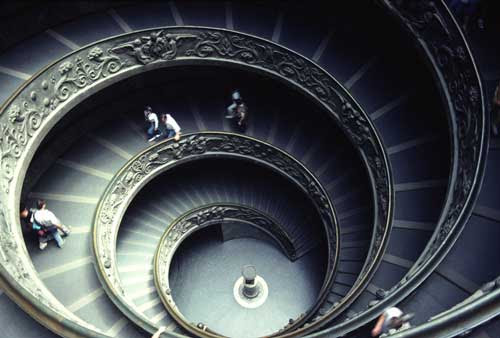 All of this required some sort of formal learning so that we could produce quality products consistently. This process worked similar to Boyd's OODA Loop:

Of course the training we provided had to be created and implemented rapidly and was often done through the use of small chunks. Anything less would only lead to chaos.

The other part of a complex environment is providing better means of informal learning as all this learning taking place would be quite inefficient if placed in a formal learning platform. This means that you must not only support the formal learning though faster and smaller learning chunks, but also support the ever increasing informal learning. One way of accomplishing this is through the use of a three-prong process: 1) capture the Lessons Learned, 2) store it in a social site for easy retrieval, and 3) provide a microblogging tool to help others to learn about recent lessons learned.

As noted in my last post, informal learning can be just as expensive as formal learning, thus the need to get more bang for your bucks. Part of its inefficiency is capturing lessons learned. That is, while a person or small group may learn something new, that learning is rarely or never passed on to others in the organization. Thus while there may be a lot of informal learning occurring, a lot of it are repeats. One of the best means for combating this is through After Action Reviews (AAR). You can help "push" AARs into the working environment through formal learning, such as: 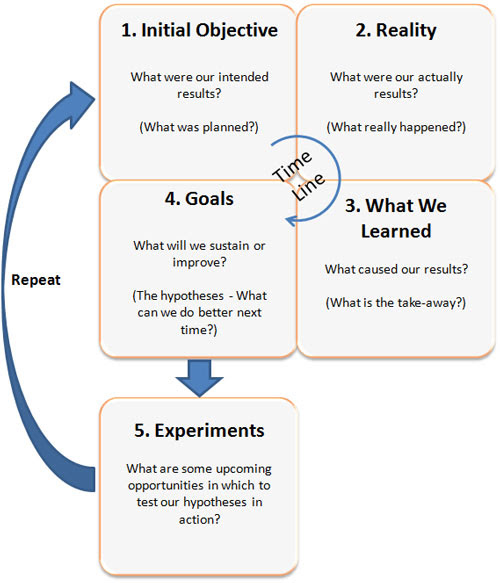 Once the learners have learned to capture Lessons Learned and then actually put it to practice, they need to move them to a storage site, such as a wiki or SharePoint so others may learn from them. Throughout my travels I have noted that some of the most barren social media sites are often corporate wikis. This is because most were implemented in the same manner as the old Knowledge Management systems were — write your knowledge down and then put it in the wiki. Yet, as we soon learned, people don't want to waste their time creating content that someone MIGHT use. But fortunately, using a wiki as a site for Lessons Learned is the perfect vehicle as the content have already been created through the AAR process and what the participants have learned will more than likely be needed by others.

In addition, we need one more tool for carry the Lessons Learned forward — a microblogging tool such as Twitter, Yammer, Present.ly, Socialcast, or Socialwok. While some of the lessons learned may require formal learning techniques, the majority do not. However, simply putting them in a wiki or SharePoint is not enough as people who have done similar projects in the past and are about to start a new project do not normally go digging through sites to see if something new has been learned. Thus such microblogging tools are invaluable for:

Now while some people and indeed, entire groups or teams will naturally take to such microblogging tools, others will not. Thus you have to know your learners — do they need help with learning the new technology? Don't stop with just a class. Ensure you push the learning into the workplace by requiring them to complete x number of tweets per week, or asking x number of questions and tweeting x number of recent learnings.

Hopefully this three step process will be useful in your quest to support informal learning by capturing the Lessons Learned through the use of an AAR, storing it in a social site, such as a wiki or SharePoint for easy retrieval, and then providing a microblogging tool, such or Twitter or Yammer, to help others to learn about recent lessons learned.

How do you plan on supporting the informal?

The True Cost of Informal Learning

Before I start I want to note that in a very few instances I've been accused of not helping the cause when I question some of the research on informal/formal learning. My position is that I'm neither fer er or agin it, but rather discovering the truth so that we can make logical decisions in our performance efforts. For example, late last year I blogged a post defending informal learning. With that being said...

I'm sure most of you are familiar with this chart in which we are told that 20% of the learning is formal and 70% is informal, yet paradoxical we spend 80% of our training budget on the formal and only 30% on the informal:

The trouble with this chart is that while the percentage of learning is basically correct, the amount we spend on each is based on weak research. Even if all the numbers are correct, it does not matter what the Learning department spends, but rather what the organization spends. In addition, if informal learning was really all that efficient, why does it need it need our support?

One ASTD research project supported by the U.S. Department of Labor reported that the amount of employer investments in workplace training hovers around $210 billion annually and of that, $30 billion is spent on formal training, while the remainder, $180 billion, is spent on informal and on-the-job training (Carnevale, Gainer & Villet, 1990). Thus, informal learning gets 86% of all learning investments, while formal learning programs get 14% of the total investment.

Now if we chart those numbers out, it would look like chart 2 below; however, note that it is NOT correct either:

As we start to get the truer cost of informal learning, we discover that rather than being this highly efficient learning machine, it is probably just about as efficient as formal learning. And if you really think about, it makes sense — just because I'm informally learning does not mean my brain starts working 3 or 4 times faster than when I'm in a formal environment. In addition, formal learning would get the edge if you have a lot of people learning a particular task because because rather than each one of them "building" their own learning package, you have one designer doing the initial legwork for everyone.

Thus rather than being this highly efficient learning machine that we can ignore, it may require just as much of our attention as the formal side of learning.