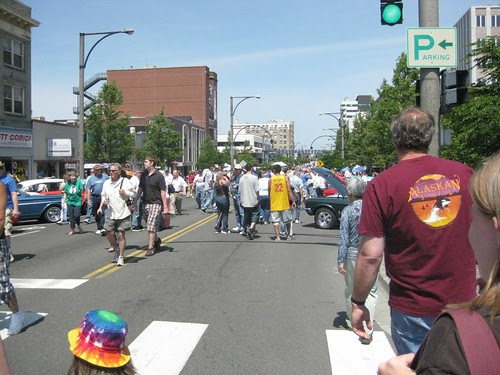 Twitter's Role in Iran--Is The Medium Really The Message? - NussbaumOnDesign

This article recently appeared in Science Daily. Part of it reads:

Stephen Mahar of the University of North Carolina Wilmington and colleagues have explored the impact of custom animation in PowerPoint lectures and examined the idea that custom animation may, in fact, negatively impact student learning.

To test their hypothesis, the team recorded two versions of a PowerPoint lecture. The presentations differed only in the presence of animation to incrementally present information. They then showed students either the animated or non-animated lecture and then tested the students recall and comprehension of the lecture.

The team found a marked difference in average student performance, with those seeing the non-animated lecture performing much better in the tests than those who watched the animated lecture.

While maybe its news to the researchers, Instructional Designers have know about this phenomenon for some time. Ruth Clark and Chopeta Lyons wrote about it in their most excellent book, "Graphic for Learning" (2004):

Humans have a low perceptual threshold for movment. Therefor, animation is a very powerful attention grabber. In fact, if you are not careful, too much animation is so powerful it will become a distraction or even an annoyance. (p85)

On using too many effects, the authors warn:

Chances are the learners will enjoy the the animation immensely but not be able to answer the most basic questions about the simple process the animation describes. (p86)

We often think that people are more interested in "Bright Shiney Objects" but this research shows that is not always true.

Researchers from the University of Valladolid (UVa) have shown that the effectiveness of company web sites depends more upon their informative content than on the impact their designs may have on viewers' emotions.

Are Engineers, Scientists And Mathematicians Enemies of Innovation? - Business Week

We need more anthropologists and sociologists working with our engineers and scientists to develop services, products and experiences that people need and want. And we need managers in companies to understand what they do and enable this doing.

In a nutshell, the Web 3.0 will function a little bit more like a human being. It will "understand" how facts and ideas are connected. And it will also "understand" what you're looking for and take your own particular context, needs and preferences into account. Your interaction with the Web will "feel" less like the operation of a machine and more like interaction with another human being.

Unclear objectives, lack of team communication and ineffective meetings are among the top time wasters that workers around the world say make them feel unproductive for as much as a third of their workweek on average. Via Twitter