This is the third in a series of posts on Agile Learning Design:

The second concept of PODSI (Plan, Orientate, Design, Select, & Iterate) is Orientating to ensure you understand the contextual issues of the environment you will be designing in. 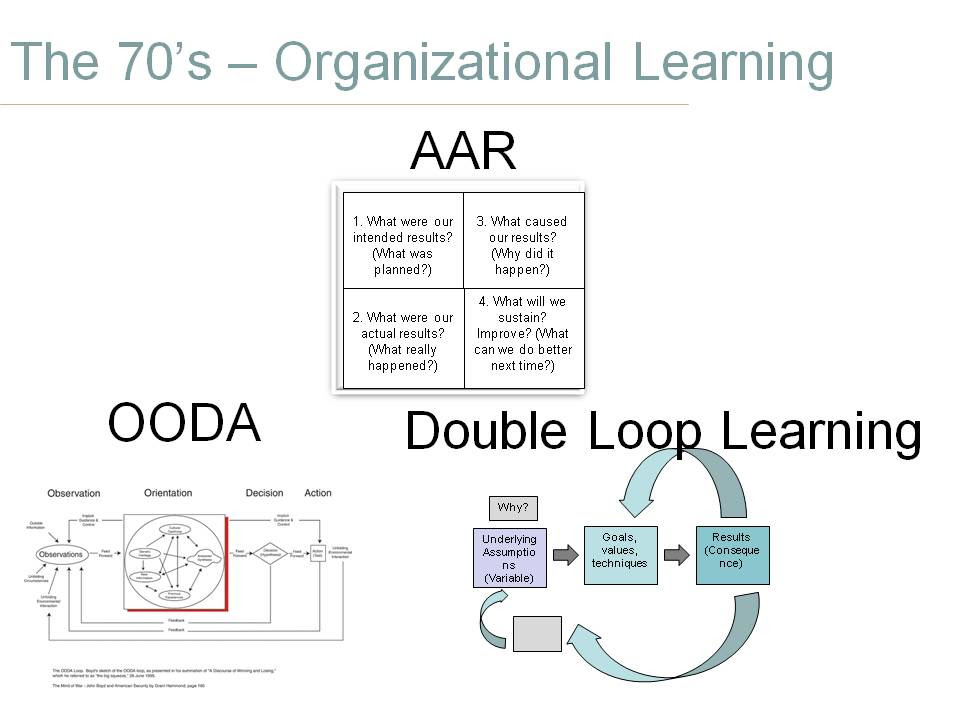 In the early 70's, three similar, but different, concepts emerged on the importance of orientation and learning — Boyd's OODA Loop, Double Loop Learning, and After Action Reviews. 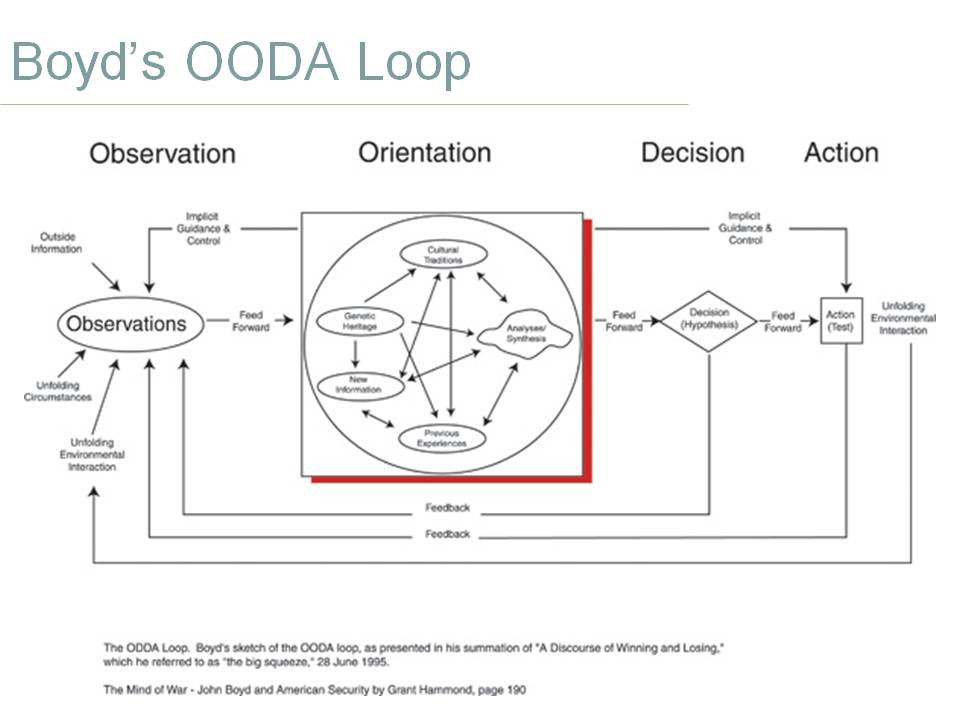 Col. John Boyd, USAF, developed the OODA Loop for decision-making in a combat environment, particularly for combat pilots, and is now used in many organizations. He viewed problems as a cycle of Observation, Orientation, Decision, and Action, (OODA) and determined that whoever could cycle through the loop the fastest would win in a combat fight.

Boyd realized that people normally performed three of the decision-making tasks — observing, decision, and then performing an action, perhaps without really thinking about it, but one of their biggest weakness was failing to orientate themselves to the environment; thus he spent most of his time talking about it. This is why he highlighted "Orientation" in his diagram. 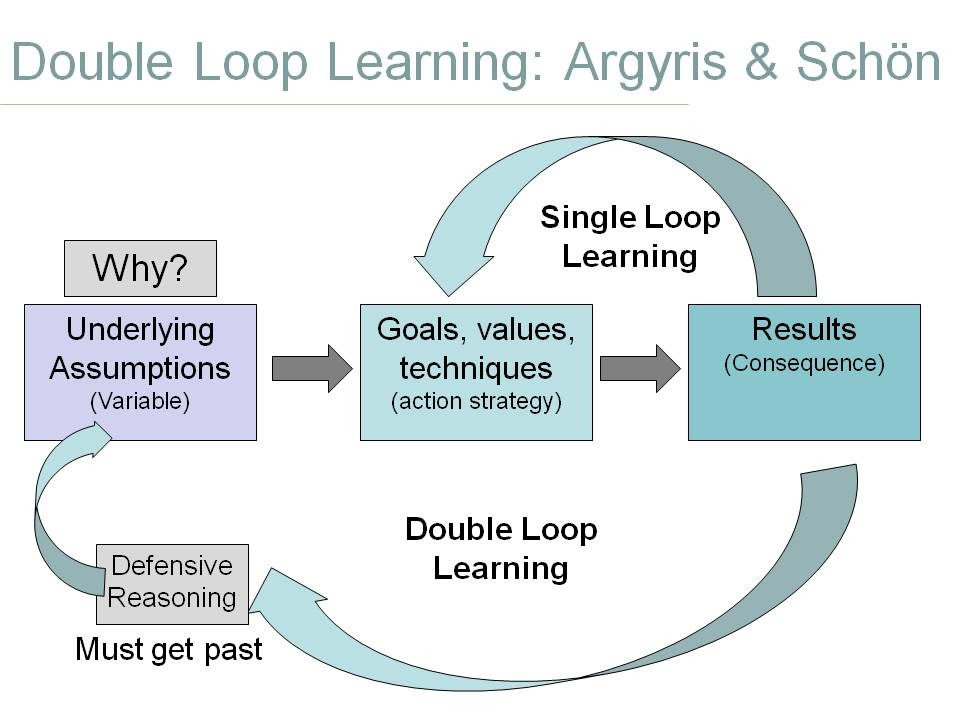 Chris Argyris coined the term "Double Loop Learning" and "Single Loop Learning. Single loop learning has often been compared to a thermostat in that it makes a "decision" to either turn on or off. Double loop learning is like a thermostat that asks "why" — Is this a good time to switch settings? Are there people in here? Are they in bed? Are they dressed for a colder setting? — thus it orientates itself to the present environment in order to make the wisest decision.

A person who is double loop learning is basically "orientating" herself to all possible solutions within her environment by asking a series of "whys" that is similar to Sakichi Toyoda's (the founder of Toyota) method who used a technique he called the Five Whys — when confronted with a problem you ask "why" five times. By the time the fifth why is answered, you should be at the root cause of the problem. 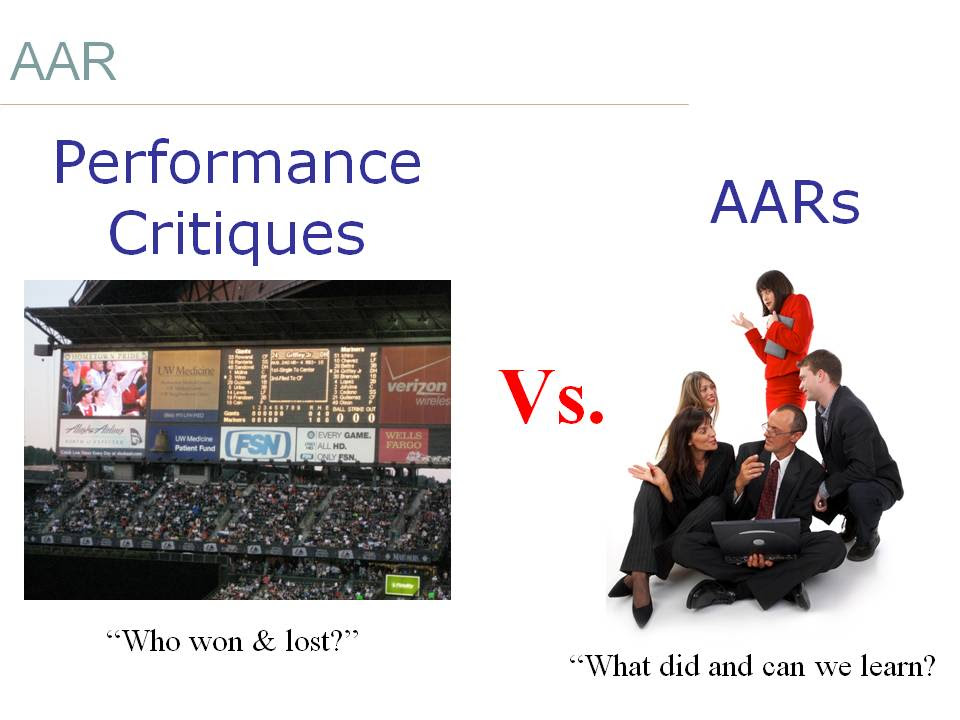 Before the early 70's the U.S. Army used Performance Critiques to determine the effectiveness of training (mostly war games), which in a nutshell determined who won and who lost. Deciding that this was not the best way to get their money's worth they came up with the After Action Review (AAR):

The U.S. Army's did a slight twist on orientating oneself in that after a learning event, there is still more to learn by re-orientating oneself to the past and then asking a lot of whys so that new learnings are created — one prepares for the future by learning from the past. Learning is transformed from an event to a process by discovering "lessons learned."

Differences between a Performance Critique and an AAR: 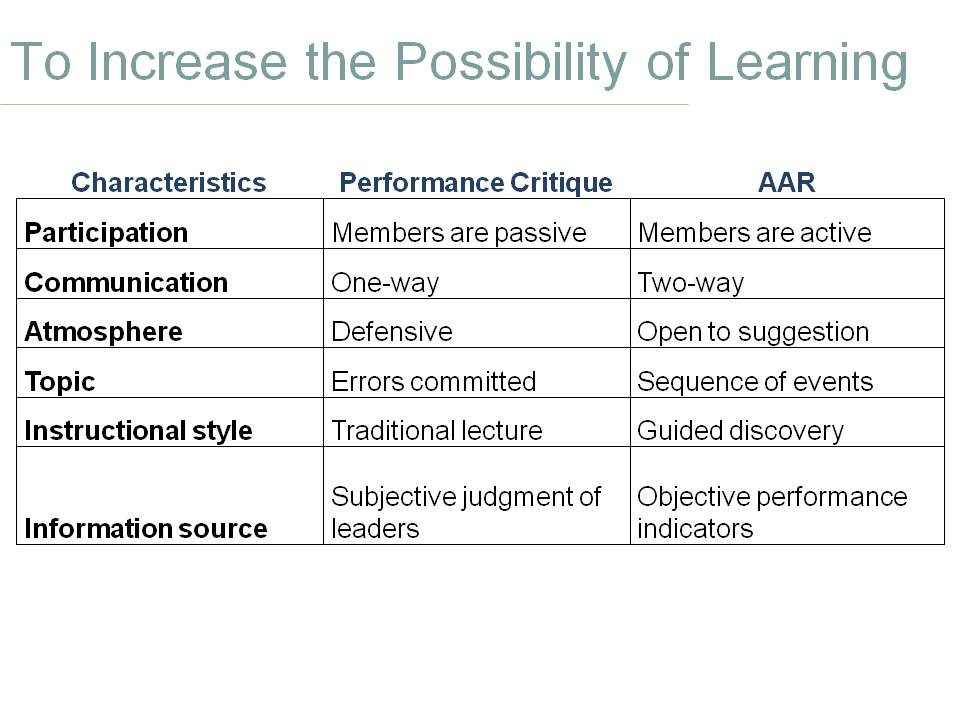 Orientation in the Agile Design Environment

With all this emphasis on orientation you would think that by now we would have it down pat, but the truth is that people do not spend enough time on it, thus solutions continue to miss their intended mark. To aid us in orientating ourselves to the proper level of complexity so that the initial learning architecture can be designed, we will use the Cynefin (pronounced cunevin) framework.

The Cynefin framework was created by Dave Snowden and coworkers at IBM's Institute of Knowledge Management and consists of five domains: 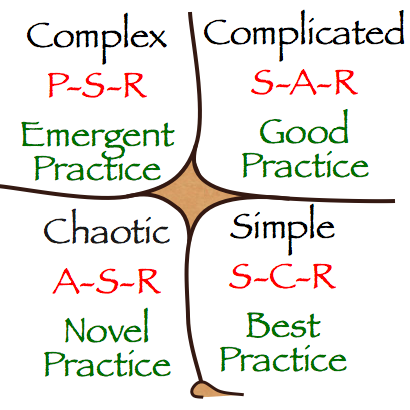 In this short video, Shawn Callahan of Anecdote gives a very good explanation of the Cynefin or Complexity model:

While gaining a full understanding of Cynefin framework requires a fairly extensive workshop, there are a few simple techniques that will help to identify the complexity of an Agile Design environment. However, to do so we need to tightly define three terms: subject matter expert, exemplary performer, and expert performer.

Exemplary performer: Is able to perform the tasks for a certain subject area and is worthy of imitation, but does not have a great deal of knowledge about the peripherals surrounding the subject or task.

Expert performer: Is able to perform the tasks for a certain subject area and is worthy of imitation; in addition they have a great deal of knowledge about the peripherals surrounding the subject or task. An example might be a physician assistant (PA) who works in that job during the day and teaches college courses about it at night or a PA who not only performs the duties, but has performed in a number of surrounding areas that gives him a broad context of the subject and tasks. Basically an expert performer is both a SME and Exemplary Performer.

These definitions of the various "experts" that learning/instructional designers call upon are keys for identifying the complexity of the design environment:

While this is normally one of the easier learning platforms to design, it does have a couple of pitfalls. The first is thinking that since it is fairly easy to design, it is also easy to learn and perform, thus the failing to build enough practice time into the learning platform. Designers often become so absorbed in their work that they fail to realize how much time they are putting into it, thus they spend a couple of weeks working on the task, then think they can transform it into a two-hour information dump.

In a Complicated design environment someone on the team will identify one or more Expert Performers whose skills (exemplary performance) and knowledge of the surrounding tasks and subject matter can be combined and/or transformed to form a "good enough" practice. The idea here is to take the "best" practices of their exemplary skills and subject matter expertise, along with the input of others, and combine them into a workable performance solution. In addition, you are going to start relying on the learners or affected (those who are going to be most affected by the learning solution) more as the problems are going to be slightly more wicked than within a Simple environment.

Like the simple environment, you will have to watch for the two pitfalls; however, in this Complicated learning environment you will probably have to pay about equal attention to both the formal and informal learnings of the learners/performers, in addition to relying on more iterations to ensure you get the feedback of the affected.

In a Complex learning design environment there are few or no exemplary performance examples to draw upon, thus you rely mainly upon subject matter experts (SMEs) and others to try to draw a picture of an "emergent" practice. However, some, if not most of the SMEs, should come from the environment (those affected) as they are probably the best "experts" of that environment.

In a Chaotic learning design environment the initial solutions will come mostly through the managers and affected/learners. While the approach is to Act - Sense - Respond, it will more than likely require several iterations, rather than a one time shot. After each iteration, reexamine the environment to see if it has dropped to a lower level, more than likely a Complex environment, then take the appropriate approach.

We look at the present through a rear-view mirror. We march backwards into the future. - Marshall McLuhan

While you will often look to the past to predict the future, entering a chaotic environment is often uncharted territory, thus you will need an intense amount of collaboration to create unique solutions so that you do not harm your customers and the workers/learners with a poorly implemented solution.

If by chance you discover you are in a Disorder environment where no one is sure of the environment, then more collaboration is called for with perhaps a few more "experts" (mostly the learners). Remaining in this state is unacceptable.

I took the main points (practices) of this post and inserted them into the Value and Principles Matrix (See first post on Agile Design for Learning) to show how orientation fits into the values and principles of Agile Design: 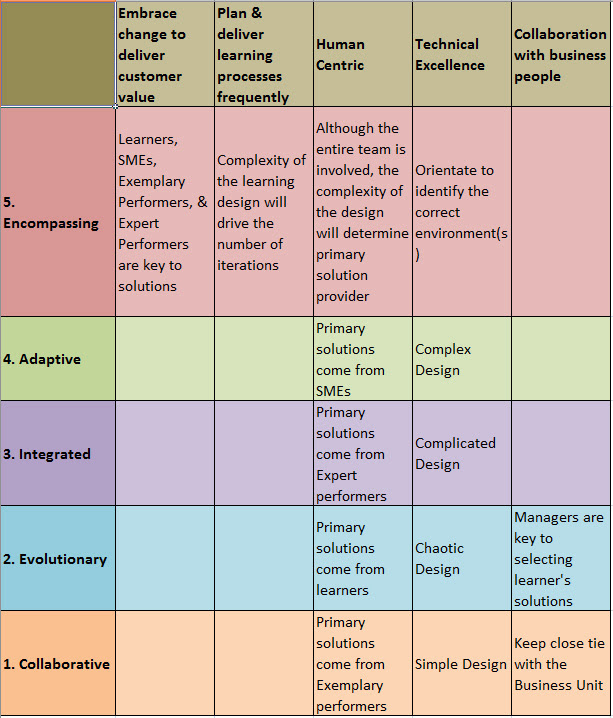 Note On some systems the xlsx version will try to download as a zip file. In that case, click the above xlsx file with the right mouse button to bring up the context menu and then click "Save Target As..." item. When the dialog window opens, change the extension from .zip to .xlsx — this will save the file correctly.

I swear we share the same bookshelf :-). It is on my list to write about the Cynefin framework.

I been meaning to write about it for several months and finally got around to it - so much to do, too little time.