Informal Learning, huh, yeah, what is it good for?

Robert Bacal's post, "What Do Intellectually Impoverished Educators/Trainers Do To Make A Living? Why They Make Up New Fancy Sounding Terms" attempts to be a call to action to go beyond the hype, but turns quickly into what seems to be almost a hyperbole of fear. While Robert writes of informal learning, learning 2.0, education, and training; I'm going to stick with informal learning in the workplace to help keep this post more focused.

First, there seems to be some confusion as to the origin of the term "informal learning" by both the poster and commentators. While Jay Cross brought the concept to its present level of popularity, Malcolm Knowles is generally considered to be the originator of the term through his book published in 1970: Informal Adult Education: A Guide for Administrators, Leaders, and teachers.

While incidental learning is often dismissed by trainers, it is an important concept because it often has a motivating effect with the learners that leads to "discovery" learning. So unless other considerations prevent it, it can be worthwhile to detour from the primary objectives to take advantage of an unplanned "teachable/trainable moment." For example, if I'm instructing the learners to operate forklifts and we are discussing safety concepts, one or more of the learners might become interested in a safety concept that is unrelated to the operation of forklifts. However, if possible I should try to help them with the unrelated concept, which in turn should help to motivate them with the related safety concepts pertaining to forklifts. In addition it could lead one or more of them to become more interested in the safety program and perhaps lead them to become more involved with it.

If we were to map out the above types of learning it might look something like this: 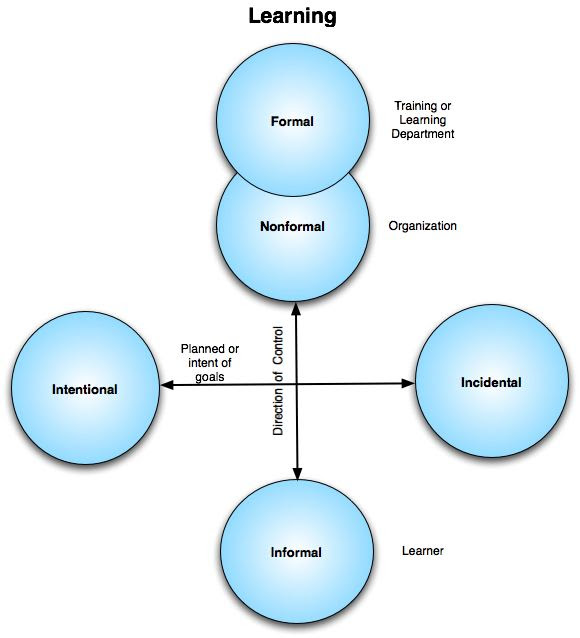 And of course the opposite also occurs in that episodes of informal learning often leads to formal learning. In addition, some learning episodes that are strictly informal may be too narrowly based in that the learner only learns part of a task or superficial skills that may not be transferable to the job (Bell and Dale 1999).

The Hype of Informal Learning

Robert does make a good point when he writes, "people going around trying to convince corporations that classroom learning is wasteful, and that they should be pouring money into informal learning activities."

Why Should We Invest in Informal Learning?

Just because informal learning has been hyped does not mean it has little or no value. As already discussed, there is a close synergy between formal and informal learning in that neither is very effective for many types of learning processes. 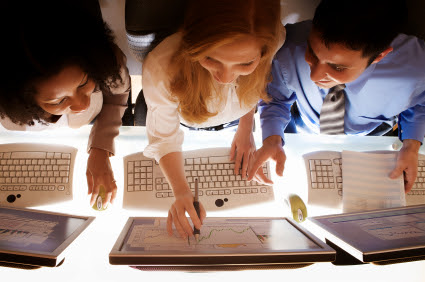 It is these multiple and repeated social and self learning episodes in the process that makes informal learning a powerful tool. That is, the number of connections greatly increases the chance for an idea, value, or pattern of behavior to be passed from one person to another (Pontus, Magnus, & Kimmo, 2009). Thus information can be both abandoned readily and reacquired if later proved useful.

In a quite interesting story, Marcia Conner reports how Humana uses simple social media tools to engage with people across the organization in order to learn from each other. These tools further increase the number of connections — if individuals can learn many times, successful learning occurs regardless of the transmission pattern (Pontus, et al., 2009). This concept is similar to overlearning — practicing well beyond the point of initial mastery.

Since this is starting to lead to the next hype on Robert's list — learning 2.0 (self-directed learning using social networking and collaboration tools or informal learning on steroids) — it's time to sign off.

Tough, A. (1999). Reflections on the study of adult learning. Paper presented at the 3rd New Approaches to Lifelong Learning (NALL) Conference, University of Toronto: Ontario Institute for Studies in Education, Toronto, Canada. Retrieved January 8, 2008 from http://www.oise.utoronto.ca/depts/sese/csew/nall/res/08reflections.pdf

Good job with this. Nice to see a measured tone.

I guess for me the most ironic thing about the tone of this debate can be characterised by crude stereotyping.

On the one, we have the incumbents, the traditionalists crying out for evidence-based practice, rigour and professionalism.

On the other, we have the 2.0 crowd, rioting at the gates of the establishment, pitchforks in hand.

The irony is that the 2.0 crowd are actually expanding the domain of the 'profession' by bringing in things that previously weren't considered and haven't been put through rigorous, evidence-based practice.

And the traditionalists have, on occasion, resorted to sensationalism and strawman arguments, rather than reasoned debate.

That's because it's a weak, muddy concept.

One of my concerns, suggested in my original post has to do with introducing more jargon into the critical communication between exec. decision makers, and trainers/consultants. If we absolutely must do so, then at least, let's sound intelligent by having very tight concepts and definitions.

The question is, what do we gain (in actionable terms) from using terms like informal learning? My answer is nothing. Oh wait. Except for providing access to information for employees. Which we should have been doing anyway, all along.

There's a lot of points you try to make that I disagree with on a factual basis. But I'll leave it at that.

Thanks Don!!! Another reason to keep my eye on your Blog!

Robert, let's start off with your first point - the definition of elearning. I think that you are correct in that it did start off wrong, but it is now basically defined as I did.

Let's take Jay Cross for example. In his book, Informal Learning, he used this definition in the glossary: Informal learning is over the watercooler, at the poker game, asking the person in the next cubicle to help out, collaborative problem solving, watching an expert, or sharing a terminal for eLearning.

But he later seems to have recanted as Jane Hart points out: informal learners usually set their own learning objectives.

Thus I would be interested in seeing some real examples from you.

In actionable terms, what we get from 'informal learning' is a locus of activity for the work that large numbers of people are doing. Clearly, Robert Bacal gets nothing from it - in actionable terms - but why should he?

Language is filled with weak, muddy concepts. They describe areas which are weakly and muddily defined. Sometimes because the people using the terms have weak and muddy minds.

But just as often there are other reasons - disagreement, culture, interpretation, context, novelty, political intentions/ bricolage. And, the nature of knowledge itself.

This is basic stuff where 'knowledge' is concerned and trainers - anybody involved in adult learning - of all people should have an innate understanding of this, even if they're not well-read in epistemology.

It's fairly clear that many people involved in 'informal learning' see the term as a kind of placeholder text, defined as much by what it's not as what it actually is. It's newish and it's political (incidentally, so what?) and it's open to interpretation.

But I also think the term 'informal learning' is being used positively. Some of the stuff that L & D people are working with just won't yield to a 'professional Learning Objectives' approach. I'm talking about wicked problems, the complex, emergent practice of the Cynefin framework, the relativism of Feyerabend's Against Method, Black Swans. . .

The thing I resent most about Robert Bacal's comments is his condescension and the contempt. There is a clear implication that informal learning, as a concept, is fluffy, simplistic and unprofessional.

It's not fluffy. It's emerging practice, therefore - as yet - undefined.

It's not simplistic. In fact, it's the opposite. It may well be practically undefinable. This is clearly a difficult concept to grasp for some.

It's not unprofessional. Critical self-awareness never is.

Hi Donald,
As usual, this is a very well-structured and reasoned post, and the perfect antidote to Mr Bacal's "curmudgeonly" and unintentionally humourous diatribe that inspired your response.

Thanks for taking the time to differentiate non-formal from informal learning; too often, I feel, training approaches & methodologies are characterised in binary pairs, from behaviourist/cognitivist, ILT/WBT, right through to formal/informal. Of course the reality is that all of these exist on a 'learning continuum.'