The U.S. Army has developed its answer to the 70-20-10 Learning model and Dan Pontefract's 3-33 Pervasive Learning model. However, they did a couple of twists by: 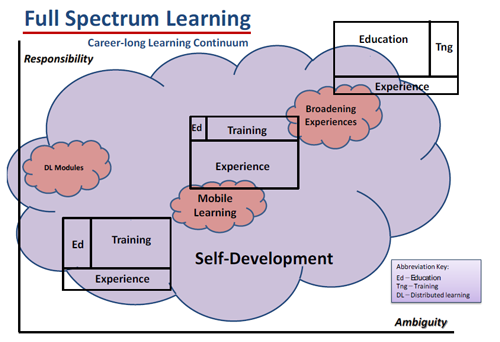 70-20-10 has been problematic in at least two ways. As Dan Pontefract notes in his book, Flat Army, it is based on leaders who were in charge of hierarchical, command and control cultures that were prevalent in the 1980s. While the U.S. Army does have a hierarchical command and control culture due to its nature, it is also composed of flat or horizontal teams (large and small) that operate alone and with each other in complicated environments that often border on the edge of chaos. Thus, it is both a hierarchical and flat organization that not only approximates how most successful organizations operate today, but is also based on all people, rather than just senior leaders.


Experience has Social Learning in a Learning Environment

The Full Spectrum Learning model realizes that if you are gaining experience to learn, then it is implied that you will be using plenty of informal and social learning, along with smaller amounts of training and education. In order to build skills and knowledge via experiences, the environment must contribute to peer-based learning through blogs, wikis, micro-blogs, and other social based media. It leverage these social tools to build dynamic vertical and horizontal social networks for formal and informal information sharing in order to foster critical thinking and problem solving skills needed for operational adaptability.


The Addition of Education

In Human Resource Development, training is normally associated with learning to perform a present job or task, while education is normally associated with learning to perform a future job or task. Thus, in a rapidly changing world, education through formal and/or nonformal environments is a required component if an organization wants to remain competitive. For example, during our last recession, companies dumped thousands of people in mass layoffs. Now they are whining that they cannot find people who have the education and training that they require. Good organizations should always be building a path towards the future by educating people to walk that path.


The Responsibility and Ambiguity Continuums