After seeing the title you might be wondering, “I didn't even know we had an ADDIE 2.0???”

When the first version of ADDIE appeared in 1975 it was strictly a linear or waterfall method. The first four phases (analysis, design, development, and implementation) were to be performed in a sequential manner. This is a good method if you are trying to prove something in that it helps to ensure that all the variables are accounted for. However, the majority of learning designers simply want to build a great learning process, and for that a more dynamic method is required that allows them to change and improve the learning process as they advance through their designs. Learning designers who were not locked in to processes improved upon ADDIE by making it an iterative model. Thus by the mid-eighties ADDIE became a dynamic model (U.S. Army, 1984).

As van Merriënboer notes, “The phases may be listed in a linear order, but in fact are highly interrelated and typically not performed in a linear but in an iterative and cyclic fashion.” This major improvement became ADDIE 2.0 in that it allowed designers to work in a more natural fashion.

van Merriënboer (1997) also noted another major improvement—other components may be added to it on an as-needed-basis. This greatly improved the versatility of ADDIE in that while it is a broad scope model that covers the basics of good learning deign, it fails to cover many of the details. Thus rather than being a stand-alone model, it is used with other design models. Thus it became ADDIE 3.0 in that ADDIE is used to guide the essentials of the design, while other models are used in conjunction with it to expand and improve the design methodology: 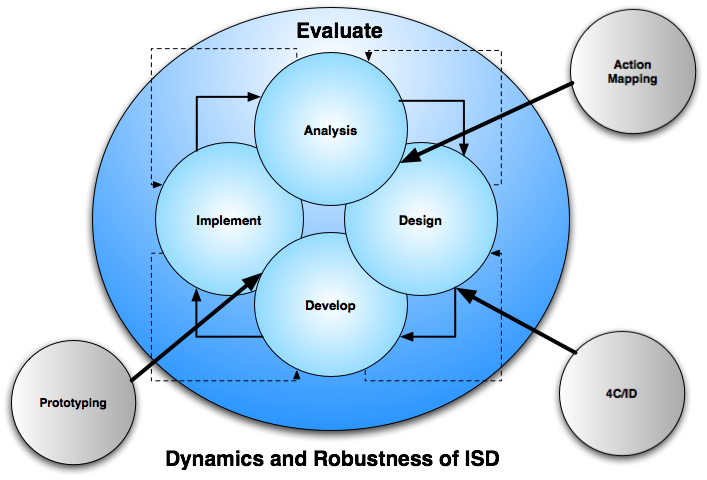