I had an interesting discussion with Clark Quinn on using Kirkpatrick's model in learning processes other than courses. Clark argues that use of Kirkpatrick’s model is only for courses because training is the dominant discussion on their web site. I disagree and wonder if perhaps it is more of a “not invented here” hesitation because advancing concepts to the next level has often been a primary means of moving forward. It might sound good to forget an old model, but if you do not help people relearn, then their old concepts have a nasty habit of reappearing. In addition, training is far more than just courses. So after some heavy reflection I did a rewrite on my Kirkpatrick web page and have listed some of the highlights below.

While some mistakenly assume the four levels are only for training processes, the model can be used for other learning processes. For example, the Human Resource Development (HRD) profession is concerned with not only helping to develop formal learning, such as training, but other forms, such as informal learning, development, and education (Nadler, 1984). Their handbook, edited by one of the founders of HRD, Leonard Nadler, uses Kirkpatrick's four levels as one of their main evaluation models.

Kirkpatrick himself wrote, “These objectives [referring to his article] will be related to in-house classroom programs, one of the most common forms of training. Many of the principles and procedures applies to all kinds of training activities, such as performance review, participation in outside programs, programmed instruction, and the reading of selected books” (Craig, 1996, p294).

Kirkpatrick's levels work across various learning processes because they hit the four primary points in the learning/performance process... but he did get a few things wrong:

Reaction is not a good measurement as studies have shown. For example, a study shows a Century 21 trainer with some of the lowest reaction scores was responsible for the highest performance outcomes in post-training (Results) as measured by his graduates' productivity. This is not just an isolated incident—in study after study the evidence shows very little correlation between Reaction evaluations and how well people actually perform when they return to their job (Boehle, 2006).

When a learner goes through a learning process, such as an elearning course, informal learning episode, or using a job performance aid, the learner has to make a decision as to whether he or she will pay attention to it. If the goal or task is judged as important and doable, then the learner is normally motivated to engage in it (Markus, Ruvolo, 1990). However, if the task is presented as low-relevance or there is a low probability of success, then a negative effect is generated and motivation for task engagement is low. Thus it is more about motivation rather than reaction.

As Gilbert noted, performance has two aspects: behavior being the means and its consequence being the end... and it is the consequence we are mostly concerned with.

3. Flipping it into a Better Model

The four levels are upside down as it places the two most important items last—results, and behavior, which basically imprints the importance of order in most people's head. Thus by flipping it upside down and adding the above two changes we get:

With a few further adjustments, it becomes both a planning and evaluation tool that can be used as a troubling-shooting heuristic (Chyung, 2008): 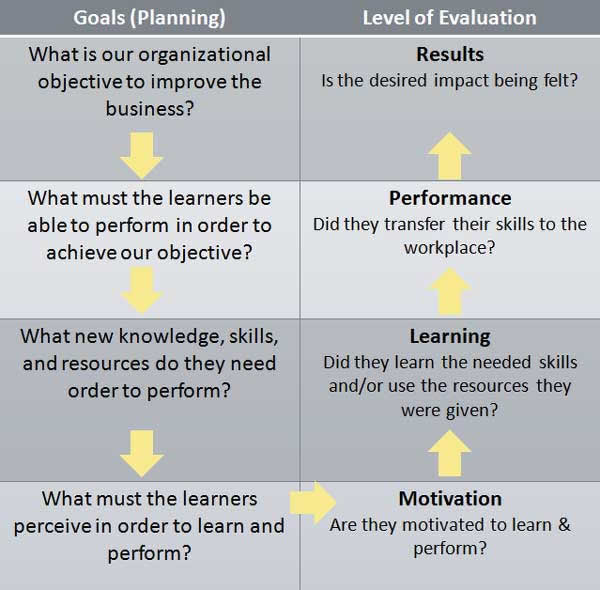 The revised model can now be used for planning (left column) and evaluation (right column).

In addition, it aids the troubling-shooting process. For example, if you know the performers learned their skills but do not use them in the work environment, then the two more likely troublesome areas become apparent as they are normally in the cell itself (in this example, the Performance cell) or the cell to the left of it:

The diagram below shows how the evaluation processes fit together: 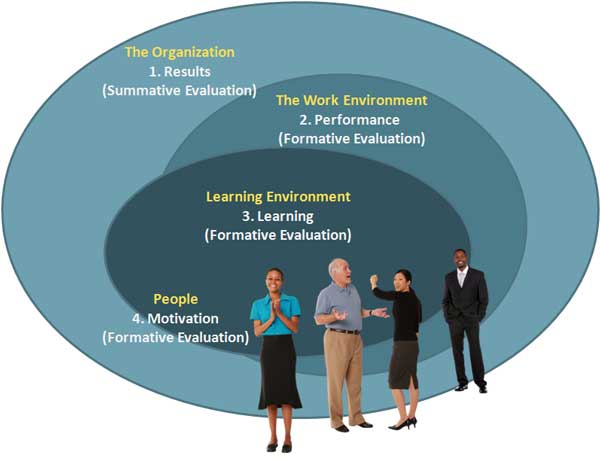 As the diagram shows, the Results evaluation is of the most interest to the business leaders, while the other three evaluations (performance, learning, and motivation) are essential to the learning designers for planning, evaluating, and trouble-shooting various learning processes; of course the Results evaluation is also important to them as it gives them a goal for improving the business. For more information see Formative and Summative Evaluations.

I go into more detail on my web page on Kirkpatrick is you would like more information or full references.

What are your thoughts?

Posted by Unknown at 7:33 PM 10 comments: Links to this post

Common definitions of visualization usually read something like, “to form a mental image,” thus we often think of visualization as being a simple solo technique, such as picturing “a dog eating a bone” or “a person doing the right thing.” However in an organization context, visualization is much more complex in that while it involves an image of the working environment, it is also a complex process that is very social in nature.

Visualization is often used interchangeably with sensemaking—making sense of the world we live and operate in, and then acting within that framework of understanding to achieve desired goals. Thus visualization is not just a shared (social) image with intent, it also implies ACTION. This framework can be used for building agile or rapid learning designs, fixing performance problems, implementing informal learning solutions, etc. 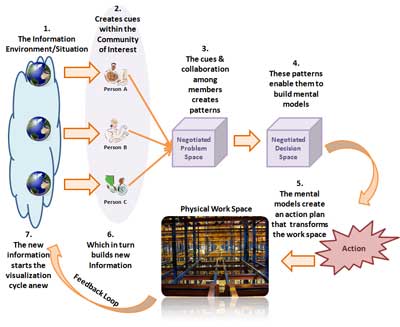 The start of a visualization process is often sparked by a cue from the environment, such as an increase in customer complaints; or a team charged with improving a process. The steps within the visualization or sensemaking framework include (Leedom, McElroy, Shadrick, Lickteig, Pokorny, Haynes, Bell, 2007):

1. Triggering cues (information that acts as a signal) from the environment are perceived by the people in a Community of Interest (CoI). These cues may be picked up by one or more members of the CoI. A couple of examples of triggering cues might be an increase in the number of customer complaints or an unexpected drop in production.

2.Triggering cues create a situational anomaly—facts that do not fit into the framework of familiar mental models. Detection of these anomalies violate the expectancies of the members of the CoI and creates a need for change (improvement).

Note: A mental model is a structure or frame that is built from past experience and becomes part of an individual’s store of tacit knowledge. It is comprised of feature slots that can be instantiated by information describing a current situation (such as triggering cues). Its functional purpose allows a person to assess the situation, take a course of action, follow causal pathways, and recognize constraints in order to achieve a set of goals for actively confronting the situation. Fragmentary mental models can often be linked together to form a just-in-time explanation of a situation. Examples of a mental model include a chess player reacting to a move on the chessboard, a doctor diagnosing a medical condition, or an instructional designer solving a performance problem.

3. Specific data from the information environments trigger the mental activation of familiar mental models. The members of the CoI analyze and discuss the anomalies until they discover a purposeful structure or pattern for interpreting the new information. This transforms the problem space into various solutions. This process of “pattern matching” starts the basis for constructing new or revised mental models. Since patterns differ among the members, they collaborate by telling stories, metaphors, etc. to build common understanding.

4. Activation of a specific mental model is typically triggered by matching salient facts to one or two key features that uniquely anchor a new model that the CoI can agree upon. Tacit knowledge or intuition is often used to build mental models and the degree of tacit knowledge will vary among the members, thus they use a “negotiation process” to ensure all needs are met (or at least prioritize them according to available resources).

5. An action plan is used to instill the selected mental model into the work space in order to transform it to the desired state (during the visualization process intent must always be associated with action, otherwise it is just wistful thinking). The action plan includes the final development of any needed content, material, or products. Once all the pieces are put together, the action plan is implemented.

6. New information from the transformation process is perceived by the CoI, which in turn processes it to determine if the patterns match their desired mental model.

7. If the new information does not match the CoI's newly constructed mental model (situational anomalies are again perceived and they may or may not differ from the original ones), then the visualization process begins anew.

While the visualization process does use passive information that derives from experience and expertise, it also involves the proactive use of shaping actions to reduce risk and uncertainty and probing actions to discover system effect opportunities that can then be exploited.

Probing develops greater understanding by experimentally testing the operational environment, such as asking questions, Cognitive Task Analysis, or immersing oneself in the troubled environment to discover new information. These probing actions help to illuminate key structures and linkages within the environment.

Shaping is taking an incentive action to discover new information in order to determine if it aids in transforming the troubled environment to meet the new mental model. Prototyping may be used as a shaping tool—an iterative process of implementing successive small-scale tests in order to permit continual design refinements. There are normally two types of prototypes:

Probing actions serve to illuminate additional elements and linkages within the visualization space that can then be subsequently exploited for operational advantage.

Visualization is Dynamic, Not Static

The visualization or sensemaking framework in not linear, but rather a dynamic process that may flow in any direction, for example:

The Dynamics of Visualization 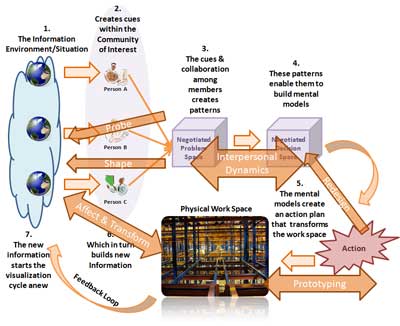 A Community of Interest holds a vested interests when faced with a troubling situation, thus they need a dynamic model that aids them in fulfilling their mission within complex environments. The military has a term called “center of gravity,” which is defined as the source of power that provides moral or physical strength, freedom of action, or the will to act. It is seen as the source of strength of the organization. The ability to act upon and transform an under-performing environment through the use of visualization or sensemaking is an essential attribute in an rapidly moving environment in that it helps to ensure the center of gravity stays balanced.

Posted by Unknown at 1:59 PM 2 comments: Links to this post