The latest podcast from Xyleme Voices, George Siemens on Social Learning Networks: From Theory to Practice is quite informative and thought-provoking; however, it still seems to leave a lot of questions unanswered.

For example, George cites the problem that Apple had with the iPhone's antenna and says it was caused by a people not being connected properly and somehow makes the leap of faith that if the people who knew about it were connected to the others on the design team, such as with social media, then the problem would have been prevented. Yet the problem is much more complex. Any good engineer will tell you that all cellphones that have the antenna inside of them, rather than sticking out, have reception problems because when you put your hand around it, it blocks the signal. But people don't want the antenna sticking out — they want it inside the phone. For example, Nokia jumped in and said their cellphones do not have this problem, yet we have a new Nokia phone in our household and the manual shows you how NOT to hold the phone so you don't block the signal.

Secondly, people want their phones as small as possible, which limits where you can put the antenna. Complicating the problem is that most of the testing was probably done on Apple's campus that gets a good signal as both ATT and Verizon have towers on it; and the problem only occurs in weak reception areas.

Thus we don't know if Apple did not know about the problem or if they knew about it, but decided it was not that big of a problem. The real problem was the way Apple handled the problem as I believe, as some other industry experts, that it was mainly blown out of proportion... after all, we love to jump on big companies.

The real problem is more of the way their public relations people handled the problem. Now could being connected with social media help them perform better, and if so how? That might have been a better and more realistic approach.

The most thought provoking part of the podcast comes about 15:10 minutes into it in which George discusses the need to do a better job of helping the learners learn how to learn (metalearning) rather than just instructing them into what to learn. I also believe that we need to do a better job at this, but we need more realistic examples — the Apple's antenna example just does not cut it.

For example, if I'm designing a course in which the learners need to learn a process to deliver our goods or service, how do I fit social learning and social media in with it? I can see how they help with informal part, but the end of the podcast wants us to a better job with metalearning in our daily training, and this is where we need some real examples.

Posted by Unknown at 12:02 PM No comments: Links to this post

This week marks the fifteenth anniversary of Big Dog being on the web! In late 1994 I subscribed to Prodigy as it was one of the first of the early-generation dialup services to offer full access to the World Wide Web. However, a few months later I decided that I did not want to just surf the web, but actually be a part of it. So I then subscribed to NWLink.com and on July 13, 1995, Big Dog went live.

As you can see, my early design skills were somewhat lacking. I did most of my html coding on MS Notepad and except for a few clipart pictures, the drawings were done on MS Paintbrush — really hi-tech stuff.

The main attraction was the SAT or ISD (ADDIE) page. The April 1996 issue of Training Magazine called my site, "The World Wide Web at its best" (April 1996, p.101). Of course it did not take a whole lot to satisfy people back in those early Internet days! 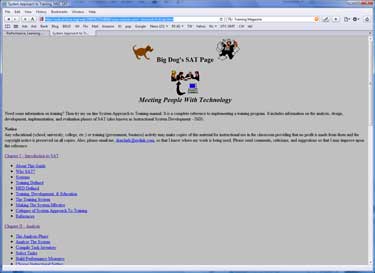 In early 1997, the Internet Archive's WayBackMachine started archiving my site. Later that summer I was running out of things to write about so I decided to put my 22 years in the Army to good use and created the leadership page, which is now one of the most popular sections of Big Dog. 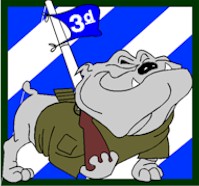 One of the questions I'm often asked is, “Why Big Dog?” While serving with the 3d Infantry Division, our company had a saying, “To the Big Dog!”, which basically meant, “We can do it!” The saying was based on a bulldog mascot that was designed by Walt Disney Productions (for the cost of one dollar) as the division commander wanted a visual picture of the song, “The Dog Face Soldier” (clink link to hear the song and learn more about it). The saying meant a lot to me so I used Big Dog as part of my site's name.

In the summer of 1998 I received an email from Big Dogs clothing claiming I was infringing on their trademark and ordered that I remove the name... so I replied to them and told them I had no intention to stop using the name... and of course I am still using Big Dog. My daughter, being the jokester, gave me a couple of Big Dog shirts the following Christmas.

About 8 months later I renamed it Big Dog's Bowl of Biscuits, as my dog, Lazy (who went to the big dog house in Heaven), loved dog biscuits, and a few years ago to Big Dog and Little Dog's Performance Juxtaposition as my small dog (Buddy, a mix of chihuahua and dachshund) wanted to be part of the marquee, along with my Big Dog — Rico, whom I adapted from PAWS. 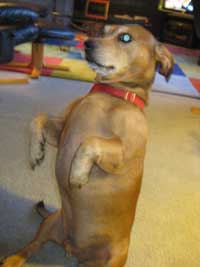 A few years back I was starting to run out of server space and exceeding the monthly quota for people visiting/downloading my site, so I got knowledgejump.com from my service provider — hopefully I'm set for a while. 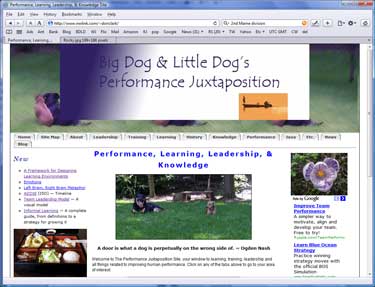 Posted by Unknown at 8:00 AM 7 comments: Links to this post