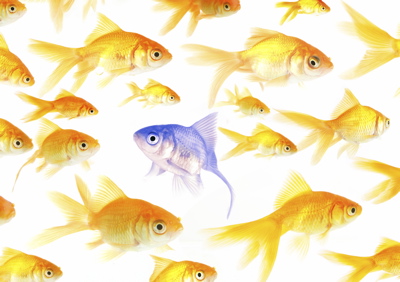 Decision Making: Is It All 'Me, Me, Me'? - Science Daily
People act in their own best interests, according to traditional views of how and why we make the decisions that we do. However, psychologists at the Universities of Leicester and Exeter have recently found evidence that this assumption is not necessarily true. In fact the research shows that most of us will act in the best interest of our team -- often at our own expense.

Down with Innovation - ID Magazine
Design is now so important, it seems, that designers can no longer be trusted with it, and to make it absolutely clear that control has moved into someone else's hands, design needs to be given a fancy new name. Call it design thinking. Call it innovation. Everyone loves design but no one wants to call it design.

No Rest for the Wiki - Business Week
The online tools for building collective info banks are making deeper inroads in corporations and rewriting the rules of collaboration. Although Intel's wiki ruffled feathers - some employees don't like being edited by colleagues, especially those further down the org chart - Intelpedia caught on.

Are You an Enduring Organization? - Bersin & Associates
There was the IBM PC Junior, the RT-PC, the 9370 Minicomputer, and many more. These products, often the results of years of R&D, were announced with flourish and fanfare. When they failed, IBM was clearly disappointed. But the leaders of these products were not fired or demoted - rather they were forced to "learn from these mistakes" and go on and make them better.

Posted by Unknown at 6:44 PM No comments: Links to this post Encyclopedia Britannica Now Free For Bloggers - TechCrunch
You can get access to the online version for free through a new program called Britannica Webshare - provided that you are a "web publisher."The definition of a web publisher is rather squishy: "This program is intended for people who publish with some regularity on the Internet, be they bloggers, webmasters, or writers. We reserve the right to deny participation to anyone who in our judgment doesn't qualify."

Elearning: Is it time to party? - training zone
Although the general trend in usage in elearning is up, the composition of what makes up the figures is changing - less protracted periods of self-study; elearning is more real time, more rapid and more collaborative.

Coherence or Interest: Which is most important in online multimedia learning? - Australasian Journal of Educational Technology
Adding approximately 50% extra interesting but irrelevant information to a multimedia treatment did not result in lower achievement on a post-test as would bepredicted by the coherence principle (cognitive load). In authentic learning settings, interest may mitigate the effects of the coherence principle. Via Stephen Downes.

Research: the differences between media and technology - Rob Wright
Technology is more than just the media appliances used to deliver content. Technology also includes the pedagogy guiding that use of the media; it includes the teaching strategies driven by stated objectives; it drives toward desired outcomes, using a healthy mix of experiences, activities, and tasks. It mingles collaboration with reflection.

Best Methods for Product-Based Training - Chief Learning Officer
Training can be categorized into the following levels: Update from ASTD TechKnowledge - Rapid eLearning News
"Surprisingly, everyone wanted to bad-mouth E-Learning, but no one bothered to stop and ask Jennifer to tell us more about why it was working so well for her." Effective management methodology: be sure management drives the process and only do what works!

Informal Learning 2.0 Fieldbook - Jay Cross
Join the Fieldbook project. People do not read un-books; they participate with them. Participants choose how deep they want to explore a topic.

Wikipedia breeds 'unwitting trust' says IT professor - Computer World
Professor Lichtenstein says the reliance by students on Wikipedia for finding information, and acceptance of the practice by teachers and academics, was "crowding out" valuable knowledge and creating a generation unable to source "credible expert" views even if desired. An expert is held accountable if they make a mistake but no one is held accountable for the information available on Wikipedia.

The Wisdom Scorecard, Monika Ardelt
Monika Ardelt, a sociology professor at the University of Florida, developed a questionnaire that attempts to assess how wise people are. The questionnaire contins 39 questions in three dimensions - cognitive, reflective, and affective. Once you have completed the questions, you can see your wisdom score.

The abuse of language - Cognitive Edge
Once upon a time people in Information Management decided that they wanted a cool new name or two. Taxonomy was becoming Taxidermy so they absconded with Ontology and twisted its meaning.

In Pictures: How To Unlock Your Company's Creativity - Forbes
Innovation lurks within myriad nooks and crannies of any company--from the receptionist to the head of information technology. While running a full-fledged democracy is impractical, employees at every level should have a way to share their ideas.

Strategy On The Front Line - Forbes
If you have an organization headed by a man or a woman who has a clear ideology, and everyone else can see that he or she is just not prepared to compromise, it is a lot easier for that organization to decentralize decisions because everyone knows certain rules will not be broken.

Posted by Unknown at 7:58 AM No comments: Links to this post

Let Computers Compute. It's the Age of the Right Brain. - New York Times
Although popularized in the 1980s by the artist Betty Edwards in her book "Drawing on the Right Side of the Brain," the right-brain-left-brain dichotomy originated with the research of the American biologist Roger W. Sperry in the 1960s.

HPT Practitioner Podcast contest for ISPI - Guy Wallace
Guy Wallace has created 21 Video Podcasts for an "HPT Practitioner Podcast" contest for ISPI. Hopefully many others will also create some and add them to Google or YouTube and then create a post at ISPI's "HPT Connections"(free to anyone - dues paying members or not) and embed the code to add them to this new Social Network site. The "group page" for these Podcasts with info about the contest and how anyone can participate is here. The Podcasts are available on Google Video too. Just search under "HPT Practitioner Podcast." Guy also has a couple of posts about the ISPI speakers: Marc Rosenberg and Don Tosti.

Working Memory Has Limited 'Slots' - Science Daily
The evidence shows that working memory acts like a high-resolution camera, retaining three or four features in high detail. Those features allow the brain to link successive images together. However, while most digital cameras allow the user to choose a lower resolution and therefore store more images, the resolution of working memory appears to be constant for a given individual.

OUT OF PRINT - The New Yorker
The rise of the Internet, which has made the daily newspaper look slow and unresponsive; the advent of Craigslist, which is wiping out classified advertising -- have created a palpable sense of doom. Independent, publicly traded American newspapers have lost forty-two per cent of their market value in the past three years. Traditional media just need to realize that the online world isn't the enemy. In fact, it's the thing that will save them, if they fully embrace it.

No Web site spends anything remotely like what the best newspapers do on reporting. Even after the latest round of new cutbacks and buyouts are carried out, the Times will retain a core of more than twelve hundred newsroom employees, or approximately fifty times as many as the Huffington Post. The Washington Post and the Los Angeles Times maintain between eight hundred and nine hundred editorial employees each. The Times' Baghdad bureau alone costs around three million dollars a year to maintain. And while the Huffington Post shares the benefit of these investments, it shoulders none of the costs. Thus, bloggers merely "recycle and chew on the news."

And Behind Door No. 1, a Fatal Flaw - New York Times
The economist, M. Keith Chen, has challenged research into cognitive dissonance - the ability of people to rationalize their choices.

Social Media Will Change Your Business - Business Week
Venture firms financed only $60 million in blog startups last year, according to industry tracker VentureOne. Chump change compared to the $19.9 billion that poured into dot-coms in 1999. The difference is that while dot-coms promised to make loads of money, blogs flex their power mostly by disrupting the status quo

Meditate on This: You Can Learn to Be More Compassionate - Scientific American
The way you are going to understand the emotion of someone else is by somehow simulating, experiencing the emotion. It makes sense that we found some activation of the brain region which is critical for the experience of an emotion.

design science - orgtheory.net
While the natural sciences seek description, explanation or prediction of what is, design scientists ask what could be, seeking betterment of the human condition.

How to Use Twitter in Higher Education - Silence and Voice
I decided that I will list my Twitter name on the syllabus for the class I am teaching that begins tomorrow, Project Management for Training. I decided to do this after reading an article in the Chronicle, Forget E-Mail: New Messaging Service Has Students and Professors Atwitter.

In Web World of 24/7 Stress, Writers Blog Till They Drop - New York Times
To be sure, there is no official diagnosis of death by blogging, and the premature demise of two people obviously does not qualify as an epidemic. There is also no certainty that the stress of the work contributed to their deaths. Posted by Unknown at 10:05 AM No comments: Links to this post